No borders enjoyment in the four-country region

The most beautiful sites above Lake Constance traditionally belong to vineyards. The Müller-Thurgau, Pinot Gris, Pinot Blanc and Pinot Noir grapes enjoy sunny lake views  from the Rhine Valley to the Rhine Falls. Viticulture has shaped the landscape and the people here for centuries. Everything that makes the hearts of wine fans beat faster can be found around the lake: Unforgettable wine excursion destinations, events, wine hiking trails, bookable experiences and accommodation offers. 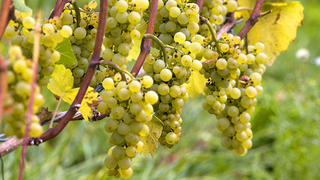 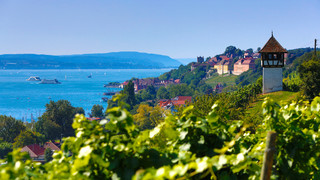 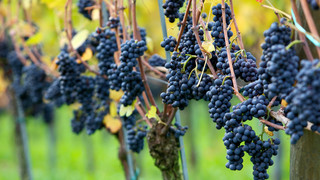 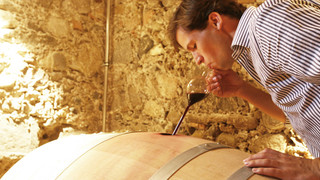 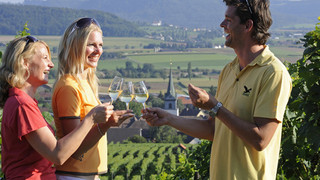 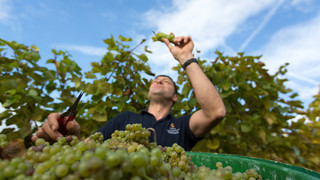 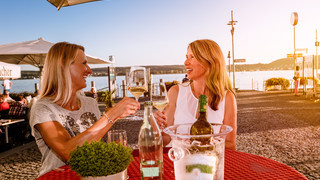 Wine has been produced here for a very long time on the German bank and Rhine Valley in the cantons of St.Gallen, Thurgau, and Blauburgunderland around Schaffhausen, Switzerland — as well as Liechtenstein and Vorarlberg, Austria.

All of the wine-growing areas benefit from the special climatic conditions: Lake Constance acts as a heat regulator that balances out temperature fluctuations and reflects solar energy. Nevertheless, all regions have their own character because the grapes grow on different soils, (terroir) and are crafted further by the hands of the winegrower. In addition to the regional "classics" Müller-Thurgau and Pinot Noir, other cultivars include Sauvignon blanc, Chardonnay and many more.

The first wine at the lake

The first vine was planted on the monastery island of Reichenau in 818 under Abbot Heito I. The reason was simple: the monasteries of Reichenau, Ittingen, Fischingen, St.Gallen and Salem needed mass wine. For a long time they were the most important vineyard owners besides the nobility. Only later did they become the property of the state. At first, the winegrowers on Lake Constance did not have an easy time. Cold winters, poor harvests and the consequences of the war years caused the winegrowers problems. The grape variety Elbling was mainly cultivated and its sour taste gave the lake wine a very bad reputation. However, the freezing frost also had a decisive advantage: new grape varieties were sought that would be suited to the climatic conditions of the Lake Constance region.

Müller-Thurgau: The vine of hope

The white grape variety Müller-Thurgau is the result of the work of Professor Hermann Müller. The professor from Tägerwilen in the Swiss canton of Thurgau crossed Riesling with other grape varieties. For a long time he was not sure which vine produced Müller-Thurgau. Today we know that Madeleine Royale was used. Outside Switzerland, however, his breeding was initially ignored. In a night-time smuggling operation, the vine later reached the German shore where it was cultivated secretly by Johann Baptist Röhrenbach. The young winemaker was convinced that the early ripening Müller-Thurgau would help Lake Constance wine gain a better reputation. He was eventually proved right.

Pinot Noir: A recipe for success

Another grape variety that contributes to the success of Lake Constance wines is Pinot Noir - also known in Switzerland as Blauburgunder, Clevner or Cortaillod. This demanding grape variety requires a balanced climate to mature to its fullest flavour. Lake Constance provides the ideal conditions for this. Its silky and fresh strength makes it the most frequently cultivated red wine variety in the Lake Constance region today. Various types of wine are made from the dark blue multi-talented grape: Salmon red rosé wines (Federweisser) as well as light and dark red wines. Furthermore, pinot noir is present in almost all Champagne wines. And the final surprise: There is more red than white wine today on Lake Constance.

Wine experiences at a glance

If you would like to learn more about Lake Constance wine, you’re in the right place:
you’ll find more at selected wineries, passionate winemakers and in expert museums.

Want to see the point of interests on the map?

Year-round enjoyment is guaranteed at Lake Constance with wines, delicacies, socialising and dancing in the lake breeze. Here you will find an overview of the most important wine events in the region.

Wine becomes an experience with exceptional tastings and special arrangements for individuals and groups. Click here for an overview of these and other bookable wine offers at Lake Constance

Individual: 13.50 € per person
Details
Show all

Discover the countryside, stroll through vineyards and enjoy typical regional dishes on the way to the wine. Whether by bike or hiking boots, get very close to the vines on these tours. There are additional wine tours in the Bodenee Tourenportal » 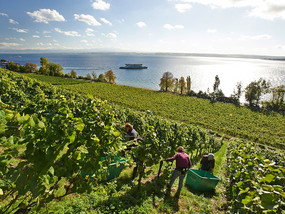 From Red to White 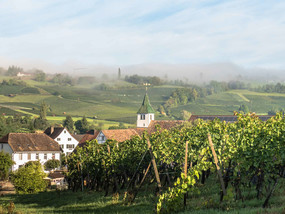 Stay overnight at the winegrower's ... even in a wine barrel! Suitable arrangements round off your pleasure vacation in the Lake Constance wine region. 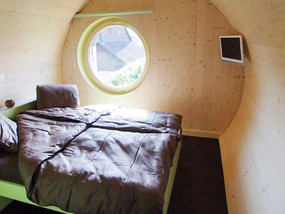 On a spring night in 1925, two local young men secretly set off in a row boat. Their fathers eagerly awaited their return home from the Swiss side. The young men had 400 grafted vines in their boat. Johann Baptiste Röhrenbach was determined to cultivate Müller-Thurgau grapes after tasting it for the first time at Arenenberg Castle on the Swiss side of Bodensee. He was so smitten with the refreshing white wine that he decided to smuggle the vines back home. The variety was a new hybrid showing superstar promise in the wine world and he knew this early ripening grape was ideal for cultivation in Germany. After the successful smuggling operation, Röhrenbach began to cultivate the wine, but was only allowed to press small quantities in Immenstaad. The new wine soon became the hot topic among connoisseurs and in spring 1926, the wine thief repeated his smuggling tour and secretly distributed vines to interested winegrowers. Today, Müller-Thurgau is the most widely cultivated grape in the region.

The wine associations around Lake Constance are competent partners for all aspects of Lake Constance wine: from the winegrowers and wineries to the grape varieties and tastings.

Information about the wine-growing canton of Schaffhausen, home of Pinot Noir
Details

Overview of the winegrowers, wineries and wines from the German Bodensee
Details