When winter is drawing to a close in the four-country region around Lake Constance, the carnival is a very special highlight. Witches and jesters move through the alleys, creating a unique carnival atmosphere everywhere, be it in the streets or in restaurants and festival halls. “Ho Narro”, “Narri Narro”, “Juhu”, “Huhuhu” – as unmistakable as the call is the activity of the fools in the city streets, heralded in on “Schmotzigen Dunschtig” in numerous processions with impressive masks and costumes. In the individual towns and villages, sometimes very old traditions are maintained, designed to chase away the winter. 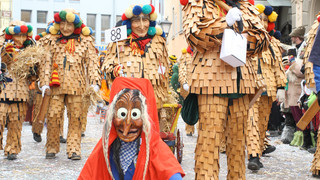 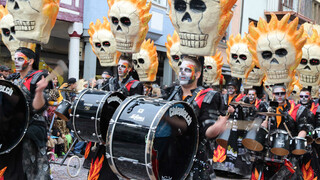 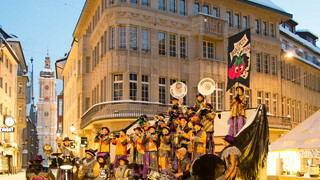 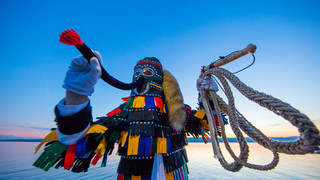 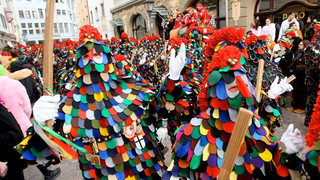 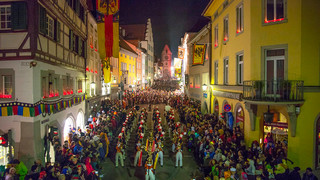 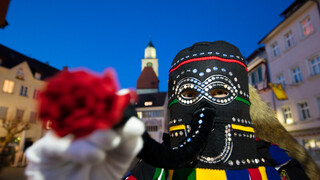 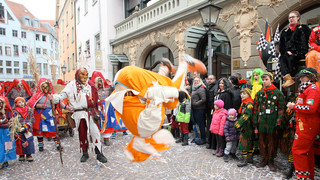 Swabian-Alemannic "Fasnet"
A regional name for Carnival “Fasnet” comes from southwest Germany and parts of German-speaking Switzerland where one talks of Fasnet, Fasnacht or
Fasent.

“Verbrennung” — Burning
On the night before Ash Wednesday, Carnival festivities officially conclude. Burning the giant straw figure on Stephansplatz in Constance is the grand finale event.

“Wecken” — Wake up call
Thanks to the traditional early morning Fools’ Rousing, the night of Fat Thursday quickly comes to an end. The fools prance through the streets in the early morn with fanfare and drumming, rousing everyone from bed.

“Wurstschnappen” — The Sausage Grab (Konstanz)
Not to be missed! The Blätzlebuebe Sausage Grab is on Shrove Monday after the children’s parade at the Marktstätte.

“Zunftmeister” — Guild Master
As chairman of the Fools’ Guild, the “Guild Master” represents his club at all official events.

Carnival marching bands, masquerade parties, balls, parades and much more. Foolish traditions like these turn normalcy on its head during the Swabian-Alemannic Carnival in Constance. February 28 marks the kick-off to all the foolery with the traditional Carnival Proclamation in the historic old city. Until March 6, you’ll hear the cries of “Ho Narro!” here, there and everywhere: in the streets, in quaint wine bars, at the dance balls and during the mischievous Fat Thursday morning ‘Wake Up Call.’ Highlights include the Butzenlauf, one of the oldest Carnival traditions in southern Germany. Then there’s the popular Hemdglonker where everyone parades through the streets in white nightshirts and hats on “Fat Thursday,” followed by the spectacular “Witches’ Burning” Hexenverbrennung the night before Ash Wednesday. The mix of medieval Carnival traditions have evolved over the centuries and these “fifth season” customs are kept alive by the different Carnival Guilds whose handmade masks and costumes are much celebrated. Not just local fools, but guilds from the region and beyond meet up in Constance to celebrate together. The Constance Carnival atmosphere is unique with its cozy alleys, mystical morning mists and breathtaking lake and alpine panorama.

Did you know…? In 1879, the first ever “White Shirt Misfits Parade” Hemdglonkerumzug took place in Constance. Its origins come from an earlier public shaming custom where Constance high school students would reproach teachers for their mistakes and weaknesses. An original Constance tradition, the “White Shirt Misfits Parade” in Constance is traditionally held on the night of Fat Thursday, and others like it take place in different cities. Participants must wear the obligatory white nightshirt!

The climax of the Swabian-Alemannic Carnival peaks between “Fat Thursday” (the Thursday before Ash Wednesday) and the following Fasnets-Dienschtig or “Shrove Tuesday.” The undeniable highlight of the Überlingen Carnival is the Hänselejuck, a special Saturday night parade. At 7:00 pm sharp, the troop of Hänsele Fools, demonically lit by red Bengali flames are accompanied by an army of Carnival musicians as they hop and dance through the medieval Franzikanertor up to the Hofstatt. Hundreds of the traditionally costumed ‘fellows of the guild’ snap their whips and heckle the crowds as they make their way toward the shore of Lake Constance.

Origins of Überlingen Carnival
Reaching far back into the Middle Ages, fasting and atonement were strictly enforced, resulting in serious diet restrictions. Meat consumption was totally forbidden and animal products like lard, fat, milk, cheese, butter and eggs were not allowed at the table. On the eve of the fasting period, all forbidden foods were served up, lest they spoil. Where food was served and drunk, music was played. People danced and partied and this was accompanied by unimaginable human debauchery. This wild celebration among Überlingen community quickly earned many followers, and soon the celebration was not just limited to one night. The more elaborate the festivities, the greater the preparation. Tradition has it that in earlier times, Monday, Tuesday and Saturday were slaughter days. Following the strict Lent rule, three days wasn’t enough time to consume all the meat by Ash Wednesday so it wouldn’t spoil during the required abstinence. The Friday before was taboo as a reminder of the day when Jesus' died and thus a weekly fast day. That’s how the Thursday before Ash Wednesday came to be known as (Schmotziger Dunschtig = schmotz = schmalz = fat). Thursday was the last slaughter day before Lent and soon marked the actual beginning of the boisterous celebration we know as Carnival, a secular off-shoot that lives on to this day.

The Hänsele Character
The main character at the Überlingen Carnival is the “Hänsele” figure. He is first named in historical documents dating back to 1766, but even earlier accounts from the Lent rules of 1496, describe this character as a Teufelshäs, meaning devilish costume. The men made these devilish costumes from cloth scraps and wore them, according to the historic documents. The name Hans, Hansel, or Hänslin was a synonym for Devil in the late Middle Ages, so scholars attribute this connection between the two names. Such demonic characters had their place in religious processions and church performances.

The “Hänsele” belongs to a genre of Fools called Plätzle-Narren, a regional breed from Lake Constance and the Hegau. The current Überlingen “Hänsele” style hasn’t changed since WWII. An extremely unique look, this character wears a black linen cover-all adorned with colorful blue, red, green and yellow felt strips and silver sequins. The head mask is most unusual and the snapping whip is an essential part of the Hänsele ensemble.